Enjoy a visual tour of Sri Lanka - "The Resplendent Land".

Posted by Pat Richards at 9:47 AM No comments:


The most gorgeous sunset we have ever seen painted the sky on our first night back from this weekend's Mission.  Just when we thought it could not become any more amazing - it did.

That's how God is! Doing wondrous things that cause us to worship Him in awe. Then just because He loves people - doing something even more spectacular.

If you don't believe in miracles - you may be skeptical about what I am going to write here.   Let me share two verses from God's Word, the Bible, that I hope will challenge you to believe.

When Jesus walked this earth, He touched people's eyes and healed them:  "Jesus said to him, “Receive your sight; your faith has healed you.” Immediately he received his sight and followed Jesus, praising God. When all the people saw it, they also praised God."  Luke 18:42-43. (NIV)

"Jesus Christ is the same yesterday and today and forever." Hebrews 13:8 (NIV)

Some received eye glasses that enabled to them to see clearly for the first time in many years.  Whether to sew, read their Bibles, or for distance vision.  Each was grateful.  The cost to travel to the city, have their eyes examined, and then purchase glasses was far beyond their financial ability.

Everyone received personal prayer.  Many were touched by the healing power of God. We saw several definite miracles this past weekend. We expect to hear about many more. These are real people, with challenging lives, who will never forget that God Almighty loves them and healed their bodies.

Suvarnalatha is a lady in her 60's who came in with a pair of old bifocals.  Gary examined her eyes and wrote down the strength she needed. Then he and Layasing prayed in faith that God would heal her eyes.  At the dispensing area - none of the glasses improved her vision. After trying four different pair - we sent her back to be reexamined. Her vision was better without any glasses at all! God had restored her eyesight.

An elderly Buddhist couple were only given one number for the eye exam.   The wife asked that her husband's eyes would be examined.  He is 84 years old, she is 74.  Both are small and thin - yet strong in the way you have to be when life is hard and physical labor in the hot sun is a daily requirement.  She was talking to him very loudly, and explained that he was extremely hard of hearing.  After his eye exam - he received prayer for both his eye sight, and his hearing. When his wife realized that he was starting to hear better - her eyes welled up with tears.  The love they had for each other was clearly evident.  His hearing continued to improve and we are expecting to hear that it is fully restored.  The wife's eyes were also examined (even without a number).  Both received reading glasses and went away very happy - knowing that Jesus loves them.

A college age girl came and asked for reading glasses. As she was prayed for, God touched her eyes and her vision became clear so she did not need glasses.

When a pen light is shone into person's eyes, cataracts reflect the light and can be clearly seen covering all or part of the pupil.  They cause the vision to be cloudy or muddy.

A Buddhist lady named Kusumawathi came with cataracts in both eyes.
They were so bad that a vision test would not have been possible. As Gary and Layasing prayed, she said a white light hit her eyes. Gary checked again and the cataracts were dissolving.  Prayer continued and her eyes totally cleared.  They looked as clear and bright as a young child's. She could see clearly - the cloudiness was gone.  She left with mild reading glasses, praising God for her miracle.

A second lady also had cataracts in both eyes.  Her right eye became much clearer, and the left eye started to clear.  Believing for complete healing for both eyes.

Saturday evening was a healing service. After seeing cataracts literally dissolve through the power of God, Gary preached about the account of Bartemaeus receiving his sight in Mark 10:46-52.  Jesus is the same today as he was 2,000 years ago when he walked this earth.  Restoring physical sight.  Giving spiritual sight.  Changing lives through His love.

Thank you for your part in what God is doing.  Your love, prayers and support makes it possible for us to deliver His love to these precious people.

The first lesson you learn when traveling and working outside of the US and Canada is: Be flexible and don't stress - over anything!

Between a busy schedule, and intermittent access to the Internet - we have a lot to share.  Expect our updates to come at random intervals.

The itinerary planned for our trip has already been adjusted twice.  The locations for our first two weekend Missions were switched. When we arrived in Sri Lanka on Thursday Oct 9th - we drove to Minneriya, a city on the Eastern Side of the nation.

Since the civil war ended in 2009, the army built and runs the hotel where we stayed.  The grassy sports field was great for our morning walks.  We watched the new recruits take their morning run, while dodging the pack of stray dogs, and a couple grazing cows.  This is where we had our first taste of Sri Lankan food - and it is really delicious.

The weekend Mission Outreach was hosted by the Minneriya Methodist Church. They invited several neighboring churches to join them.  It was wonderful to see the different denominations come together, including the local Foursquare Pastor.

Friday was an all day Eye Clinic.  Over 60 people were seen, with 50 receiving glasses. So many people had cataracts, it was heart breaking.   After getting their eyes checked, each person was prayed for. Then their glasses were dispensed, and they were prayed for again.  God's Word promises that the prayer of faith will heal the sick - and that includes God touching their eyes!

Saturday - Gary shared the Word during the two morning sessions, and Pat shared in the afternoon.  Many people gave their hearts to The Lord!  Many came up for prayer for healing.  On Sunday morning we were overjoyed to hear several reports from those that received their healing!  The Pastor's wife had taken a bad fall 5 years ago and because she was unable to receive any medical attention she had constant pain in her check bone.  She testified that when she was prayed for, the pain in the left side of her face stopped immediately.

Sunday morning worship service with all four Methodist Churches in the area joining together.  The people sit on mats on the floor.  They sing beautifully accompanied by a simple hand-drum.

Gary spoke on worship: those that worship Him must worship in Spirit and Truth. (John 4:23-24) Several people answered the call for salvation or rededication.  We ended with a time of worship

to believe and declare and thank God for the answer as we worshipped. After service dismissed, the people who had not been prayed for on Saturday came up for personal prayer.

After a typical Sri Lankan lunch of rice, dahl, fried tank fish, and onion sambal, we packed up for the 6 hour drive back to our home base in Moratuwa.

The Golden Carriage  in Moratuwa is our base hotel.  The lack of hot water in the morning is easily forgotten when we gaze out over the Indian Ocean breaking less than 50 feet from our 2nd floor balcony.  The crashing waves provide the sound track for our dreams.  Even the trains rumbling past become hypnotic.

Look for more updates soon.  Your ongoing prayers and love and support mean so much to us.

Blessings and love from Sri Lanka -- Pat and Gary 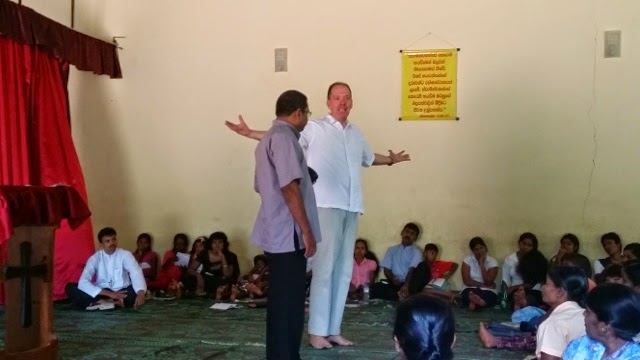 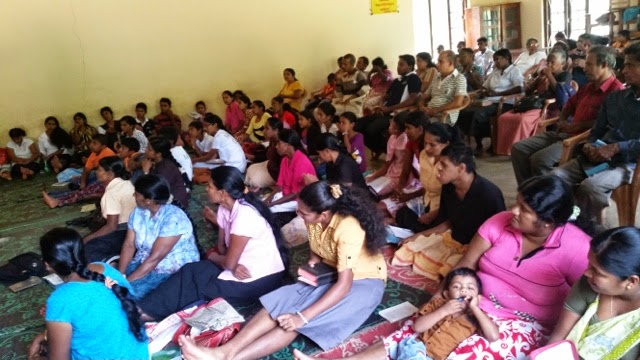 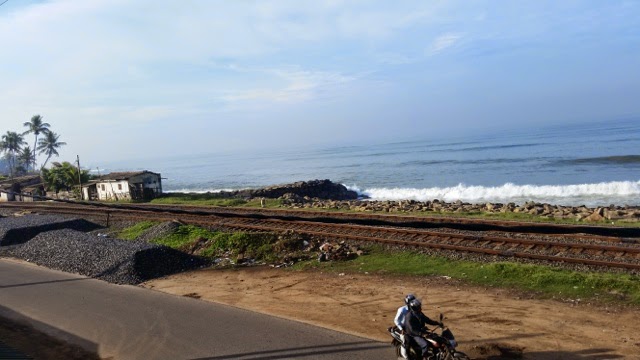 What does it take to travel half-way around the world?

Our journey took about 38 hours, across 12 time zones and through five airports before finally arriving safely in Colombo Sri Lanka.

It was 11 at night when we arrived in Bangkok - and our flight to Sri Lanka's capital city of Colombo was scheduled to leave at 7 a.m.  No time to get a hotel room, so we found a quiet corner with some reasonably comfortable lounge chairs and settled in for the night. (After enjoying a very late evening meal of Khao Suey (cow-sway) a Thai noodle soup)

The last leg of our journey on Sri Lankan Air was just 3.5 hours.  We arrived in Colombo Sri Lanka at 11 a.m. Thursday October 9th.   Crossing 12 time zones meant that we 'lost' 12 hours which we'll regain on the flight home.
After Sri Lankan Immigration, we picked up our luggage, cleared customs, changed money, and stepped into the tropical day to  meet our hosts Layasing and Deepthi DeSilva.
From Colombo we headed North East 220 km (approx 132 miles) to Minneriya.  The journey normally takes under 5 hours. However, the two lane road is being widened - which made for a lot of stop-and-go travel.
This portion of our journey ended 45 hours after leaving Las Vegas, when we settled into our hotel room for a restful night's sleep.
May today's journey find you safe and at peace.  Blessings.  Pat and Gary 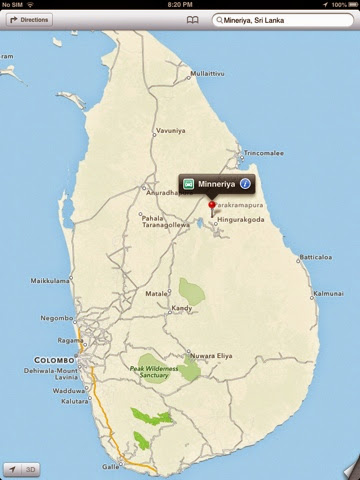 Abiding Under the Shadow of His Wing


He that dwells in the secret place of the most high, shall abide under the shadow of the Almighty.  And we say of The Lord, 'He is our refuge, and our fortress, our God in Him we  trust.'  (My paraphrase of Psalm 91)

Many of you have expressed your love and prayerful concern as we prepare for our trip to Sri Lanka.  We leave on Tuesday, October 7th.  Your prayers are so important to us. There is a strength, a comfort, in knowing that God listens and answers the prayers of His people.

It is true that there is a lot going on in this world we live in.  It is also true that our God has promised to keep us from the evil in this world. (John 17:15) This gives us great peace.

We are being wise and keeping our physical bodies strong and rested, while avoiding obvious dangers.

There is a compulsion to go. A sense of urgency. If we don't take the love and life of Jesus Christ to hurting people - who will?

The lyrics of this song stir my heart.  The song is titled "Hosanna" and sung by the group Selah.    Listen with your heart.    Lyrics

Our mission is clear; Share His love with those who are considered 'the Least of These,' and encourage the faithful pastors, evangelists and missionaries who live full time to serve them.

Your love, support and prayers are the fuel that keeps us going.  Thank you!  From the depths of our hearts.

Posted by Pat Richards at 3:06 PM No comments:

Follow us - enter your Email Address and receive our posts automatically.

What an amazing Journey it is. 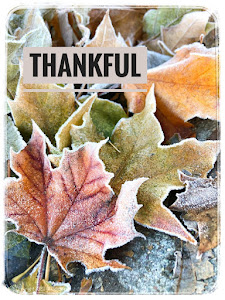